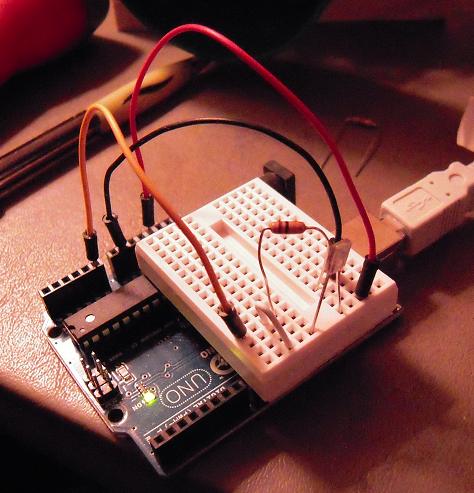 Here’s the basic idea: I’ll send commands to the Arduino by flashing a rectangle on the screen and having a phototransistor on the Arduino read the light level.

The above photo shows the test bed set-up. This is very similar to the circuit found in Getting Started with Arduino, except that I’m using a phototransistor instead of an LDR. The optimal resistor appears to be 10K ohms, as in the book.

As for how well it works — well, that’s why I built a test bed, to find out.

Once and future engineer.
View all posts by engineerzero →
This entry was posted in Uncategorized and tagged arduino, Atmel, communications, phototransistor, robot, robotics, serial-ttl. Bookmark the permalink.

1 Response to Computer/Arduino Communication Via Phototransistor