The light switch next to the front door of my apartment is inoperative, but that’s not the problem. Even if I were to put a lamp next to the door, I would be turning it on when I enter, walking to the light switch at the other end of the room to turn that on, and then have to walk back to the door to turn that light off, and then walk back to the other end of the room where I spend most of my time.

So how do I avoid that extra trip back to the door? That’s where the autofade table lamp concept comes in.

I want a portable lamp that I can turn on with a touch, and it will stay lit for about thirty seconds, long enough for me to cross the otherwise darkened room and turn on the light at the other end. Then the autofade lamp will shut itself off, sparing me the need to walk back and turn it off.

Here’s my first crack at a physical design: 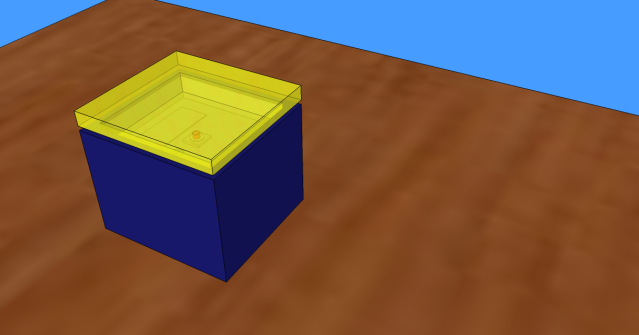 You press down on the top, which in turn presses a button inside the box. The button closes a circuit that causes the light to come on. The light is next to the button, but you really can’t see it in this picture, so let me remove the top: 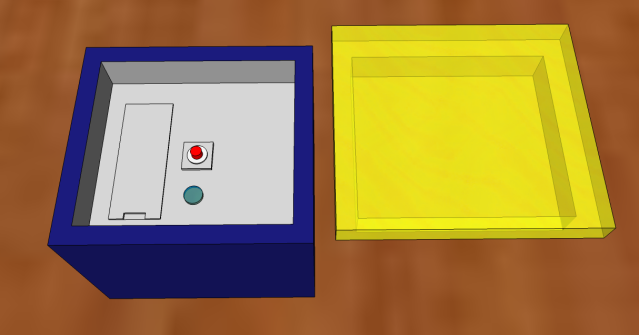 All right, and you can also see the battery compartment lid as well.

The problem with this design, I realized after staring at it for a while, is that the light is going to be shining in my eyes. So I realized, why not put the light lower, and have it shine through the sides. So I redesigned it that way, and made it a trifle more decorative.

And here’s a close-up:

The white plastic top would be hollow with thin faces, so that a soft glow would come through it when the light was on. Not enough to be blinding though.

Well, enough exterior design. What about the schematic? I had hoped it would be a simple matter of putting a capacitor in the circuit, but even big capacitors retain only enough charge to keep even a small light lit for barely a second or so.

So then I thought, why not have a capacitor drive a transistor, which drives the light? That gave me this schematic:

Well, there are a couple problems. First, the user has to keep the button pressed until the capacitor is fully charged. How long does that take? I don’t know. Based on a breadboard test I did, though, I don’t think it would take more than a second or two.

The bigger problem is that the transistor might require a minimum amount of base current in order to allow any collector current at all, and that current could be pretty much the same as what an LED drinks. So despite a huge current gain, maybe I haven’t reduced my current requirements. Being a digital guy, I don’t have much experience with transistors in analog state (or is it mode?), so I can’t say.

Well, another thought is just to forgo electronics entirely, and just use something sticky to keep the top pressing down on the button. Eventually the spring pressure of the button overcomes the stickiness, and the top is pushed back up again, and with the button no longer being pressed, the light goes off.

Perhaps maple syrup could be used. The problem then is to keep the syrup from overflowing the sides of the . . . well, I probably won’t use syrup. I think I’ll see how things go with electronics first.

Anyhow, time for a test circuit.

Once and future engineer.
View all posts by engineerzero →
This entry was posted in Uncategorized and tagged do it yourself, electronics, product design, sketchup, table lamp. Bookmark the permalink.