The One TEU Per Family Initiative 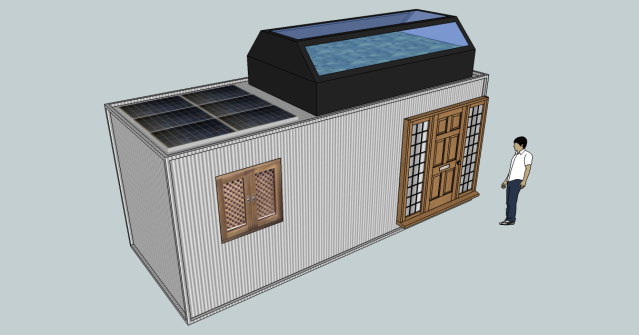 In the design shown, I’ve added a fancy door and window to a TEU (Twenty-foot Equivalent Unit) shipping container just for the fun of it. Otherwise, I’m serious about this concept.

Each of the six solar panels provides 80 watts of electrical power, or about three kilowatt hours per day. My laptop, which keeps me preoccupied much of the day, runs on seventy-five watts.

Next to the solar installation is a small hydroponic garden. From the Beginner’s Guide to Hydroponics:

In India, where household hydroponics is spreading amongst village and urban societies, it is considered that the simple method of hydroponics can supply eighteen hundred adult persons with a good meal of three pounds of greenfood daily throughout the year, from each acre of soilless garden under cultivation.

The garden I show here is 2.5 x 3 meters, which I calculate based on the above figures should be able to provide enough food for 2.8 persons — two adults and two preteen children, in other words.

The Beginner’s Guide was published in 1973, so I presume that the yields are even higher today. The question is, why does my internet search on hydroponics in India and China provide articles which refer to hydroponics as ‘promising?’ After nearly forty years, you would think that promise would be realized.

I think that maybe there is a Catch-22 involved here. Regions where technology such as hydroponics can be accessed also have market access to cheap food grown by traditional methods, so there is no need for hydroponics. Places where food is difficult to come by are also information-poor when it comes to hydroponics.

What’s needed then is some kind of low-cost, modular, turn-key, self-sufficient system to bring electricity, information technology, and hydroponics to the masses. That’s what I have in mind here.

As far as a government initiative, I’ll leave the political debate alone. What I’m interested in doing is reducing the cost of home technology so that even the poorest of the poor will have a place to live. If nothing else, you would at least be able to afford this.

Once and future engineer.
View all posts by engineerzero →
This entry was posted in Uncategorized and tagged housing, hydroponics, Shipping Container, TEU. Bookmark the permalink.

1 Response to The One TEU Per Family Initiative