Structures: Or Why Elon Musk Recommends This Book

Posted on December 3, 2017 by engineerzero 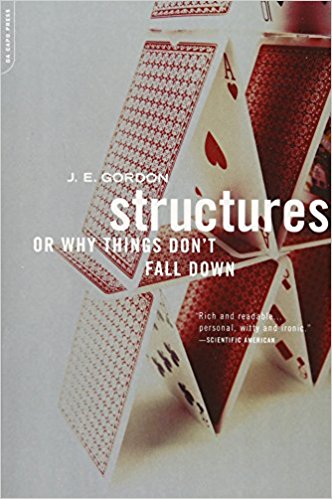 Elon Musk has provided us with a list of fourteen favorite books that inspired him, and amid fantasy novels such as Lord of the Rings and Hitchhiker’s Guide to the Galaxy and biographies of Benjamin Franklin and Albert Einstein is a book on material science entitled, Structures: Or Why Things Don’t Fall Down.

Structures was published in 1978 and was written by J.E. Gordon, a British material scientist. In the forward, Gordon refers to the book as, “. . . an elementary book about structures . . . stripped of its mathematics.”

Structures was one of only two books on Musk’s list that could be termed ‘technical,’ which caused me to think I should read it. And I wasn’t the only one who came to that conclusion. There were over two dozen holds on the single copy in the local library system, and I had to wait over a year to get my hands on it.

So why did Elon Musk recommend an obscure popular science book?  Given that the book is almost forty years old, is it still relevant and useful to today’s engineers? I’ll provide a brief overview here so that you can decide for yourself.

All Structures, Great and Small

As the complete title is, Structures: or why things don’t fall down, you might think that the book is specifically about buildings and bridges. Author J. E. Gordon, however, simply describes a structure as, “Any assemblage of materials which is intended to sustain loads,” and thus the book covers a broad range of subjects whose only connection is the application of the basic structural concepts of stress and strain.

For example, Gordon discusses design and operation of archery bows, why chariots had their wheels removed when they weren’t in use (because they tended to deform under loads), and the history of catapults — such as a Roman admiral who won a battle by hurling pots filled with snakes (which doesn’t have much to do with material science but makes an interesting anecdote).

Even farther from buildings and bridges, Gordon spends a fair portion of the book discussing structure in animals and plants. “Nature having invented life . . . it became necessary to devise some kind of container in which to keep it.” So he starts with the structure of the cell, and goes on to skeletons, and why plants are often better armored than animals (weight of armor affects mobility) and why birds have feathers (they give the wing a better lifting shape without adding excessively to weight).

While some of this discussion is technical, there are also poignant stories, like the tragic tale of the H.M.S. Captain, a nineteenth century combination sail and steam ship that was designed by a naval captain to his personal specifications after a massive publicity campaign, and which promptly sank in a mild squall with the loss of 472 lives and only seventeen survivors (the designer-captain having gone down with his ship).  Gordon writes that due to ‘muddling,’ the ship was about 15 percent overweight.  “If this had not been the case it is at least possible that the ship would have been a success and comparatively safe.”

But yes, in accord with the title, a lot of the book is about structures, and specifically, why those structures don’t fall down. So you learn about tensile strength (hanging cables) and compression (stacking things). And it turns out a lot of civil engineering isn’t intuitively obvious. For example, masonry buildings have enough compression strength to be built much taller than they were in ancient times, but stability problems arose. And why don’t cathedral arches collapse? Because of the statues on the sides. Really. Seriously. Who knew?

Despite the assertion in the forward, there is a bit of mathematics sprinkled throughout the book. Not as much as there would be in a college textbook, but some of the algebraic formulas would keep you busy at a calculator for a few minutes if you didn’t let your eyes glaze over them (like I did). For the most part, they don’t get in the way of casual reading.

And for the most part, the book is fairly light reading. It’s written in a humorous style, which you can see from the chapter titles. Here’s a couple: Chapter 5: “Strain energy and modern fracture mechanics — with a digression on bows, catapults and kangaroos.” Chapter 12: “The mysteries of shear and torsion — or Polaris and the bias-cut nightie.”

Gordon also avoids dryness by focusing on the human drama behind engineering, relating how Robert Hooke, who originated Hooke’s Law (Strain is proportional to stress), was a ‘lady’s man’ disdained by Isaac Newton for dirtying the noble pursuit of science with the shabbiness of practical application, and how Galileo, forced by the Church to recant his discoveries in astronomy, spent his days under house arrest investigating the science of structures, “ . . . as being, I suppose,” Gordon writes, “the safest and least subversive subject he could think of.”

Philosophically, Gordon stresses a number of themes, and one of the key ones is to contrast theory versus experience. He is fair to both sides. He notes that nineteenth century engineers who knew little theory built bridges that stand today, while modern bridges could not be built without rigorous mathematical analysis. Even then, mathematical analysis is insufficient to identify local discontinuities that can lead to crack propagation and structural failure. (Although in the time since the book was written, computer simulations may have gotten good enough to address this concern.)

The Book and Elon

So why would Elon Musk recommend this book above the countless other books that he’s read? Perhaps one answer is that the book was published and enjoyed its heyday at the time when he was a kid. We tend to best remember books from our youth, and because we’re impressionable at that age, we naturally are more impressed by books we read then than at later stages in our lives.  But I think there’s more to it than that.

In researching this article, I came across an interview in which Musk is asked what he would do to fix the traffic problem on an LA freeway. He suggests double-decking the existing road with prefabricated sections, and the interviewer asks, “Would that appeal to your sense of aesthetics?” and Musk quickly replies, “We would make it look nice.” This sensitivity to aesthetics is also apparent in the design of Tesla cars and the Dragon capsule and is right out of the last chapter of Structures, where Gordon laments the loss of aesthetics in the pursuit of efficiency: “Is it not fair to ask the technologist, not only to provide artefacts which work, but also to provide beauty, even in the common street, and, above all, to provide fun?”  This view of aesthetics as both important and fun clearly influences Musk’s design philosophy, and it has been a successful business strategy for him.

But also, there’s a lot in Structures that has practical application to what Musk is doing with SpaceX and the Falcon rockets. In many ways, rockets are like buildings — buildings as tall as skyscrapers, that must be able to endure gravitational stresses many times higher than normal and vibrations greater than most earthquakes, that despite the need for immense structural strength must be made as light as possible or they won’t be able to do their primary function, which is to fly faster and farther than any vehicle ever made. Gordon devotes only a few words in Structures to rockets, but if you’re aware of the engineering considerations relevant to all structures, you will be aware during reading of how much of the book is critically relevant to rocketry.

Structures: Or Why Things Don’t Fall Down may have waned in popularity over the years, but thanks to Musk’s recommendation it is enjoying a revival and is a currently a bestseller on Amazon. The ninety-three reviews (at current count) rate it between four and five stars. So Elon Musk isn’t the only person who finds this book worthwhile. I think you will too.

Once and future engineer.
View all posts by engineerzero →
This entry was posted in book review and tagged book review, elon musk, gordon, J.E. Gordon, structures, structures: or why things don't fall down. Bookmark the permalink.

1 Response to Structures: Or Why Elon Musk Recommends This Book