About a year and a half ago, Matt Richardson did a video on how to ‘shrinkify’ your Arduino projects with the ATTiny chip. It was a very interesting idea that I finally got around to doing on Friday.

Here’s what the setup looks like when the Arduino is used as the ISP programmer for the ATTiny45: 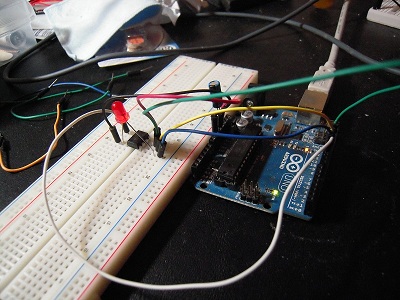 And yes, I tried the blink sketch, like so:

So you don’t need an Arduino, or even an ATMega328, to blink an LED. You can do it with just an ATTiny, which is cheaper and doesn’t require supporting voltage regulator, capacitors, and crystal.

And here is something slightly more impressive: