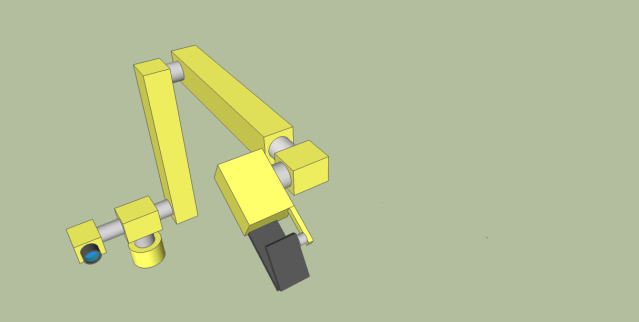 This design is based on the first iRobot photo shown here. Sketchup, by the way, is not for CAD, it’s for quickly illustrating concepts. 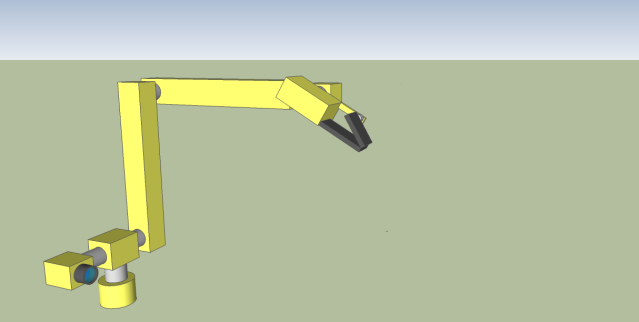 Sketchup can draw smooth curves as in the iRobot photo, but boxes are of course faster to draw, and also if I were to actually build this as an amateur, I would be using boxlike enclosures (rather than aesthetically-pleasing curves) to save on manufacturing costs. It would simply be a matter of cutting and welding sheet metal, which I figure I could learn how to do in less than a week. 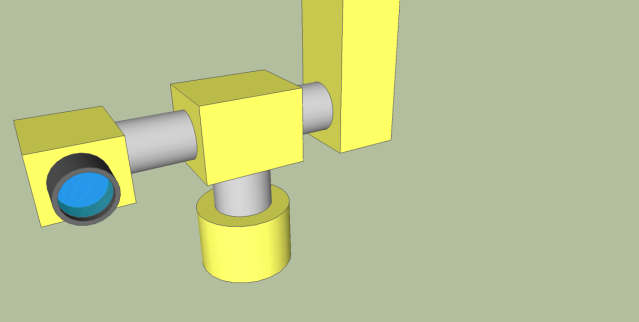 Here is the video camera. Note that the gray cylinder connectors rotate, which means that the camera box can be tilted up and down. The lower cylinder enables the entire mechanism to twist right and left, and the one on the right, of course, tilts the arm up and down. 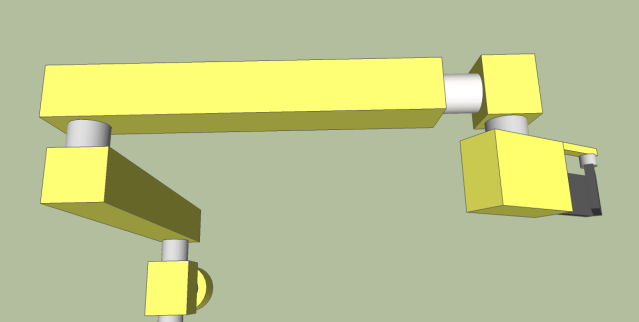 In this overhead view, we see that the cylinder on the left enables the forearm to be twisted independent of the base. This enables the arm to extend and contract its reach. 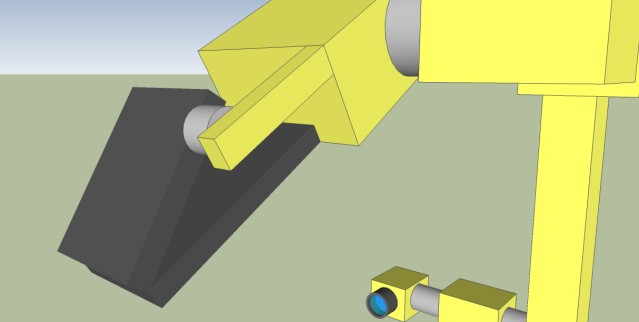 A detail of the ‘claw’ or ‘hand.’ According to the article, the iRobot is capable of lifting over two hundred pounds, which I find amazing because it doesn’t look that sturdy. If I can build an arm that can lift fifty pounds, I will be happy!

Let’s step back and again look at the side view, which suggests how easy it would be to put this on my existing robot design.

By the way, I note that one of the commenters on the aforelinked news article claimed that teleoperated robots aren’t really robots because they aren’t capable of independent action. I’m becoming aware that this is a matter of confusion with a large audience, so perhaps in the future the distinguishing term for this kind of teleoperated robot should be ‘telebot’ or ‘telbot.’ Unfortunately, if I were to use such a term now, the average person would go, “Say what?” So maybe I should stick with ‘teleoperated robot,’ but I suppose even that term is going to get puzzled stares.

I count seven cylinders in all, which is a number low enough that it can be handled by one Arduino. I guess I should read up on servos now.

Another thing I should do is learn how to do Sketchy Physics. Then I could really show off the articulation. Ah, so much to do, and so few brain cells to do it with!

Once and future engineer.
View all posts by engineerzero →
This entry was posted in Uncategorized and tagged arduino, fukushima, irobot, robot, robot arm, robotics, sketchup, sketchy physics. Bookmark the permalink.