Edison and His Inventions (an 1894 book review)

While prowling in the local Half Price Books, I came across this book. This is not a reproduction of an 1894 book, it is an original, and it only cost me $25. I feel pleased.

Here’s the title page, which gives you a taste of what it’s all about:

At the time of publication, Edison was still in his mid-forties, and the War of the Currents had been waged at the Chicago Colombian Exhibition the previous year. But you won’t find elaboration of Tesla here. This is a literary ode to Edison.

Edison, it seems, was quite the scamp as a child. He was always experimenting with things and causing mayhem with fires, explosions, etc. This did not ingratiate him with others, as we can see from these illustrations: 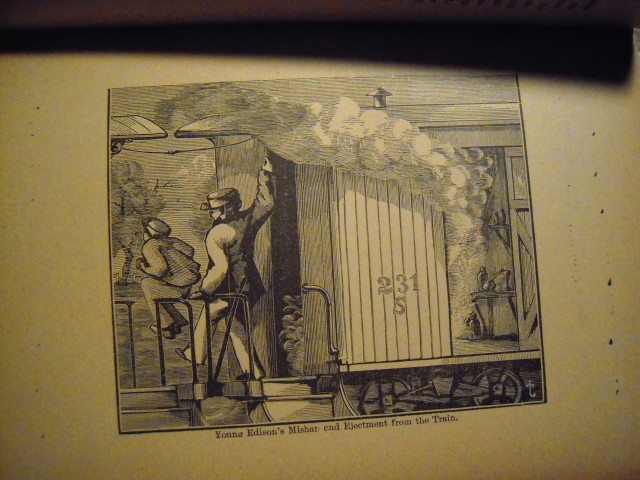 Well, at least the cat didn’t push him around. In any case, lest you think Edison was a juvenile delinquent, there is this charming tableau:

Okay, so what did Edison invent — I mean, besides crazy stories about his childhood?

Well, he is credited with inventing the electric light, but as we all know by now, he was more an innovator in that. Still, the book recounts an impressive list: the New Edison Dynamo, the Pyro-Magnetic Dynamo, Train Telegraph, the Mimeograph, Etheric Force (“a new discovery”), Tasimeter, Harmonic Engine, Multiplying Copying Ink, and of course, The Sonorous Voltameter.

You know, there are times when I wondered if the author was making some of this stuff up. But at least with the saner stuff, there are schematics:

This is for the ‘quadruplex,’ which apparently allowed four telegraph messages to be sent at the same time on the same wire. Big deal a hundred and twenty or so years ago, but not so much in use now that even Third World countries have cell phone networks.

The biggest deal of all back then was the phonograph, and you can tell just how big it is by looking at the expression of this devotee:

Well, I think she’s enamored of the phonograph. Are those poppies on the table?

This book gets so random sometimes. There’s a long section on jokes about the phonograph and the telephone, and some embarrassing jokes in ethnic dialect. I wouldn’t precisely call it racist, but it’s . . . embarrassing. 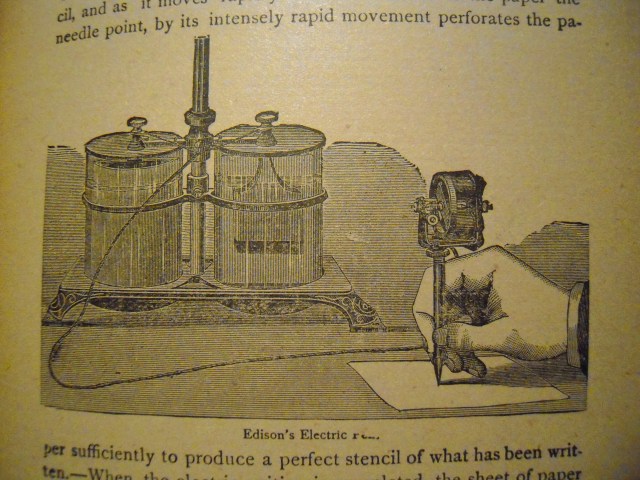 I never saw one of these while growing up. Just about everything Edison invented has become obsolete by now, and this was one of the earliest victims of the march of progress. Still, it looks kind of cool. The sort of thing that Make would have an article about.

Here’s a little flavor of how the focus of technological innovation in the nineteenth century differs from that in the twenty-first:

The clearness of the phonograph’s articulation, Mr. Edison says, depends considerable upon the size and shape of the opening in the mouthpiece. When words are spoken against the whole diaphragm, the hissing sounds, as in shall, fleece, etc., are lost. These sounds are rendered clearly, when the hole is small and provided with sharp edges, or when made in the form of a slot surrounded by artificial teeth.

I’m sure engineers at Apple encountered similar technical issues for the iPhone.

Now here’s the schematic for the electric light: 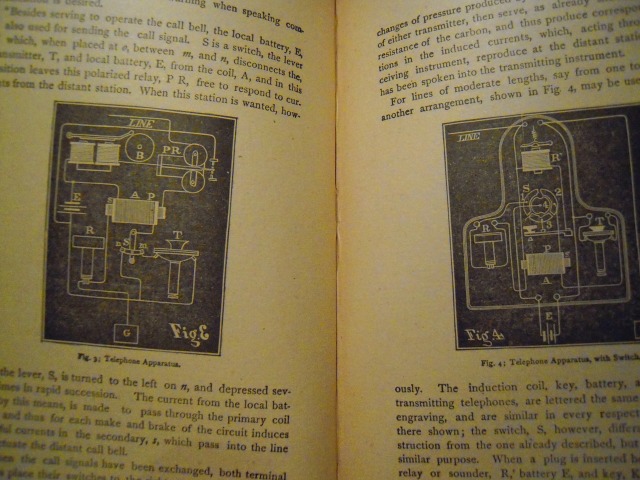 Notice, there’s nothing on the schematic about “Japanese Bamboo” for the filament, which modern technology historians identify as the real breakthrough which established Edison’s claim to fame for ‘inventing’ the electric light. Prior to JB, filaments burned out in a few hours, rendering electric lights as laboratory toys. After JB, filaments lasted for many days and electric lights spanned the continents.

The fun stuff in this book are the more obscure inventions, like the micro-tasimeter, which Edison invented to measure the temperature of stars. Did you know Edison was into astronomy? Quite a few pages in this book cover it, so evidently he was a proud father of this invention:

As you might have guessed by now, what I like most about the book are the illustrations. And not so much of the inventions as the glimpses it provides of A Lost Time. For example, here is a dynamo room, perhaps not so different than dynamo rooms today but consider that this was so novel back then that it appeared in a book aimed toward a popular audience:

Some of the shapes of this technology haven’t changed in a century — note the conduits on the ceiling — but obviously the proportions of the machinery have changed a great deal since Edison’s time.

The decision to include some illustrations in the book reveal far more about the intended reading audience than Edison. For example, the author thought that people would be interested in seeing illustrations of Edison’s buildings, like so:

This picture reminds me of a Mystery Science 3000 episode, where Joel and the robots are watching a movie from the 1930s and there’s a scene in a stadium, and Tom Servo says, “Everyone in this scene is dead.” Yep. The little boy grew up, and now even his grandchildren are probably dead. I wonder where the dog went, or if it even existed other than in the illustrator’s mind as a counterpoint to the magnificence of the Edisonian edifice. Was this illustration based on a photograph or camera obscura? No matter, Edison’s legacy looms over all, saying, “You have been lost to oblivion, but I shall endure.”

Well, for a while longer, perhaps. But then there’s this scene, in which a passenger aboard a train engages an Edison invention to telegraph while in transit: 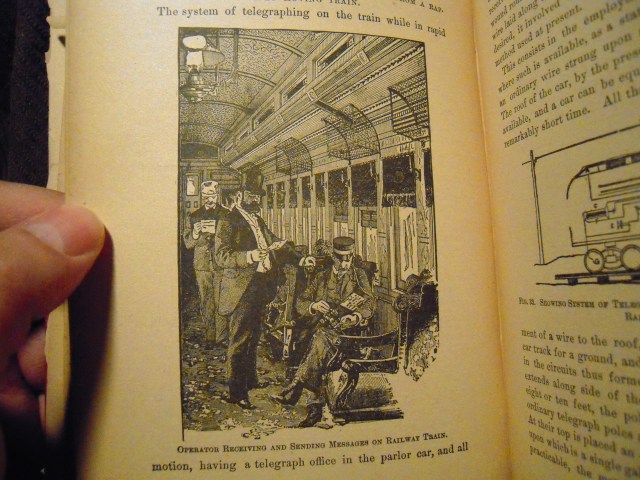 To be sure, a valuable innovation in its time, but not much use for it anymore — nor for the Edisonian process of reproducing sound waves by scratching vinyl. It serves as a reminder of the transitory nature of engineering glory.

Could the day come when Edison is forgotten? Maybe he should have spent a little time talking about death rays and communicating with Martians. That seems to have secured immortality for Tesla.

Tesla has also gained a lot of street cred in the anti-patent community, which is odd, because I don’t think Tesla ever spoke against patents. On the other hand, this book concludes with Edison’s anti-patent remarks: “I have become extremely skeptical as to the value of any patent, and so long as our patent law remains in its present iniquitous shape, I shall try to do without patents.”

And then he really lets loose:

The present law is a constant temptation to rascals, and virtually offers a premium on rascality. Under it the infringer of a patent is not interfered with until the real owner can show that he has the monopoly of the device in question. The process may take years, during which the infringer, who has money and audacity enough to secure another man’s invention, can go on and perhaps wear the rightful owner’s life out by litigation and annoyance.

Indeed, Wilbur Wright is thought to have died prematurely in part because of the stress of patent fights over the invention of the airplane. But as for Edison, I suspect that the historical record is that he did not keep his resolve and there were many more patents to come in the decades he had yet to live.

Anyhow, this book is an interesting glimpse of a technological lost world of electric dynamos carried in horse-drawn carriages, of carbon diaphragms being state of the art, of sonorous voltameters, and incredulity that machines could reproduce voices and send them anywhere at the speed of light.

Which, when I think about it, is pretty incredible. Given that we take it all for granted now and have lost our sense of wonder, perhaps we deserve to have lost the secret of how to directly convert burning coal into electricity:

Well, to tell you the truth, there are some passages in this book that made me wonder whether the author wasn’t quite accurate in taking notes when he interviewed Edison, or maybe he didn’t interview Edison at all and just cobbled this book together from unattributed newspaper clippings from reporters who did talk to Edison but still weren’t quite accurate in taking notes — and may have committed a little ‘inventing’ of their own along the way.

But what the transcriptions indicate that I do find it credible is that for all his electrical inventions, Edison really had less of an understanding of the nature of electricity than the typical high school student today. Perhaps that’s why reading some of the ‘explanations’ of how his inventions work tend to be less than enlightening. And once again, I am confounded with just how far a person can go while having only the sketchiest idea of where he is going.

Anyhow, there’s a scanned version of this book on Amazon and at the time of this writing there is also a first edition (1879) available on eBay, where it’s bidding $124 at the moment — which kind of makes me wish I hadn’t crumbled so many pages while reading mine. But I doubt that my 1894 edition would command as much. Besides, it’s not for sale. I need it for guidance.

Once and future engineer.
View all posts by engineerzero →
This entry was posted in Uncategorized and tagged Edison, Edison and His Inventions, Inventions. Bookmark the permalink.