The Volcano Beside Me

As a native of the Seattle region, I have often found it disconcerting to hear about killer weather, of tornadoes, hurricanes, cold snaps, and heat waves that leave death tolls in their wake. All we have to complain about around here is the rain, which usually is just a drizzle, so maybe we should feel blessed.

But then we have a volcano. In 1980, Mount Saint Helens erupted, spewing billions of tons of ash mainly over the eastern portion of the state. Well, maybe it’s not that big a deal, for although Seattle is only about a hundred miles north, we weren’t inconvenienced — except to stock up on disposable paper dust masks in the event of a dump of volcanic dust.

But then my grandfather wasn’t so fortunate. His town of Yakima was buried under inches of ash. He climbed onto the roof to sweep it off with nothing more than a wet handkerchief for a dust filter. The dust, the exertion, his age (76), and a lifetime of smoking combined to cause a fatal heart attack.

So it is with personal concern that I read that on Valentine’s Day, the area around Mount Saint Helens had its strongest earthquake in thirty years.

Here are a couple screen captures from the Pacific Northwest Seismic Network page. The first shows the geographical location of the volcano relative to Seattle:

The second is enough of a close-up to separate the event dots: 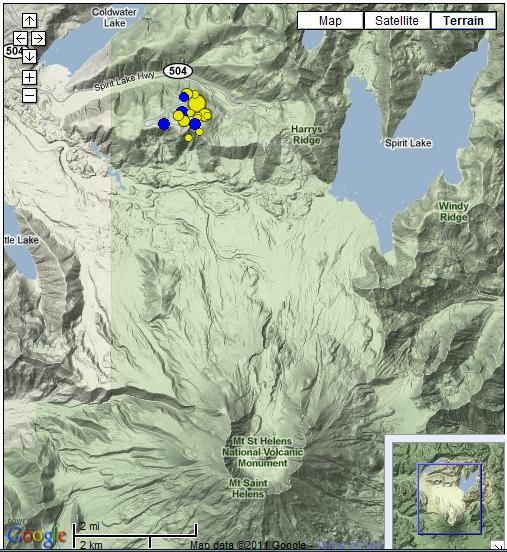 For perspective: the quake that occured on Valentine’s Day was magnitude 4.3, equal to an explosion of 2000 tons of TNT, enough to blow up a small city had it occurred on the surface rather than 5.5 kilometers underground.

This morning’s quake of 2.4 is equal to only about a couple tons of TNT, but then the depth has risen to four kilometers.

In the news this week has been Yellowstone Park, the site of a supervolcano which in past cyclical eruptions has wiped out 90% of life on Earth. And as seismologists like to say, “It’s due.” Here’s the Youtube video of the CNN report.

The Seattle Times article about the Valentine’s Day Saint Helens earthquake doesn’t mention that it was the biggest in thirty years, and the comments are quite complacent and even cavalier. Young people. For me, though, it’s been thirty years since I thought local volcanic eruptions were cool.

If there is another major eruption, the winds may blow differently this time, but I guess there’s not much I can do other than put dust masks on my shopping list.