Why Microsoft Could Die Within Five Years 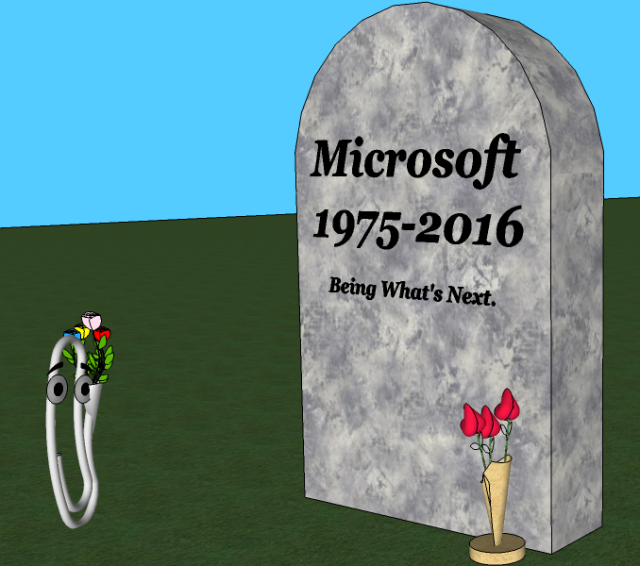 I was just watching a slide show presentation about the new Windows Phone 7. The effort looks competent. But that’s not enough to keep Microsoft from dying.

Whether it’s fair or not, people hate Microsoft. In order to overcome that hate and get people to buy its products anyway, Microsoft has always had to appear invincible and dominant. Well, that’s not going to happen this time.

Maybe that wouldn’t matter if Microsoft had brand loyalty. But it doesn’t. It has brand hatred.

First, everyone suspects that Microsoft is the ringleader of an Upgrade Conspiracy that forces everyone to buy new software and new machines with questionable improvement in performance. Then there’s Microsoft’s lackadaisical, ad-hoc approach to security issues as a profit center. And so there is zero brand affection for Microsoft.

As far as I can tell, Windows Phone 7 is competent. But with people actively hating Microsoft, it has to do better. Given a choice between two products that are equal in everything except that one of them is made by a company that consumers hate, hate, hate, the market will tend to not choose the product made by the company that everyone hates, hates, hates.

This time the company can’t outspend, it can’t dominate. It has to fairly compete with a superior product, or Phone 7 will go the way of Zune. And I don’t think it can do that. I don’t think it knows how.

“So Microsoft loses the smartphone market, how does that mean the end of the company?”

Well, because Microsoft could ignore and/or mock Linux when Linux was this tiny province of hacks at the fringe of computerdom. But with Android, Linux has a user base that is growing larger than Microsoft’s. Microsoft can’t ignore the challenge, it has to fight. But it can’t fight something better. Not when the bucks behind Android are bigger.

Android isn’t just smartphones, it’s also tablets. And that gives it a beachhead into the traditional computer market. If you have Android on your tablet, you’ll be more inclined to have it on your laptop and desktop as well. Assuming there are laptops and desktops for much longer.

Meanwhile, China has already embraced Linux because, frankly, the Chinese suspect that the US government makes Microsoft put stuff into Windows to spy on every PC user. And the Chinese aren’t the only ones who think this. Whether this is true or not, in marketing it is perception that matters. So there goes global marketing share.

So the writing is on the wall. Microsoft is outclassed financially, has a huge branding problem, is vulnerable to viruses, is suspected of snooping. To continue on top, Microsoft would need an original idea, and we’re talking Microsoft.

I think Microsoft is already dying, as it has lost its corporate primacy to Apple and where once it was renown for having no debt at all, it has started accumulating debt. The signs of decay have been there for years. It’s not just ‘Microsoft is Evil.’ The very idea of One Company Fits All has been outgrown by the global computer industry, and there’s no longer a place for a company whose de facto mission statement was Total World Domination.

Bill Gates must have seen this.

Microsoft could well be dead within five years. I won’t take bets on this because after all the government might bail out Microsoft as too big to fail, and I don’t want to parse endless verbal and legal technicalities of what constitutes ‘death’ for a corporation. Also, my nephew loves XBox Live, so maybe some parts of Microsoft will live on.

But the company as a whole is losing its grip on the computer industry as a whole, and it’s got a lot farther to fall, and that’s what it will be doing because it has nothing to grab onto to break its fall. Think of Microsoft as Napoleon and Android as Russia, and cue the orchestra for the 1812 Overture.

Once and future engineer.
View all posts by engineerzero →
This entry was posted in Uncategorized and tagged android, clippy, linux, microsoft, smartphone. Bookmark the permalink.