Football on the Moon

Posted on February 5, 2011 by engineerzero 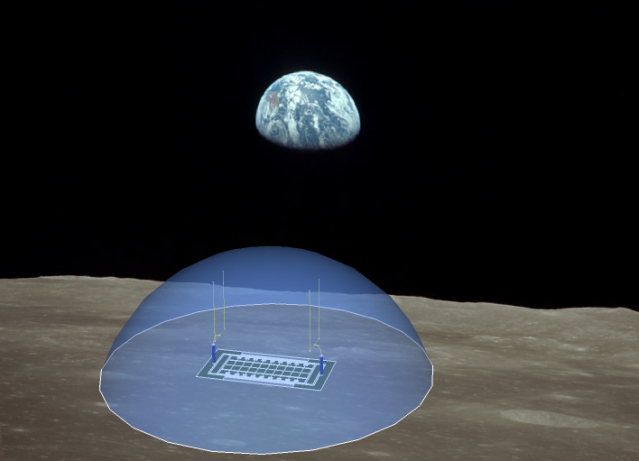 My nephew was interested in the possibility of lunar basketball, but since this is the weekend of the Big Game (non-TM), I decided to go with lunar (American) football instead.

The simple part, of course, is to put it under a glass dome, since if Neil Armstrong proved anything other than that an 80 kg test pilot can do the job of an 8 gram microchip, it’s that spacesuits tend to limit the freedom of movement that is essential for the choreography known as Football. 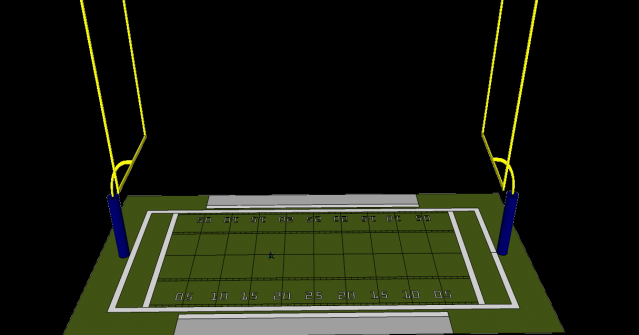 But then it turns out that horizontal distances are another matter, because running is in some respects assisted by gravity. Too much gravity, of course, and you get squashed and aren’t capable of running very fast after that, but it turns out that gravity is actually a good thing at lesser levels, it gives you things like traction and all.

Anyhow, here are two sources for running speed on the Moon:

The latter article concludes with the statement, “If a 100-yard race were tried on the Moon, nobody would approach the 10-second standard without (almost literally) a flying start. The whole distance would be used for getting up speed.” Since average speed would therefore be half of Earth sprint speed, I decided to shrink the dimensions of the field by a factor of two. (I also converted to meters, because this is happening in the Future, dude.)

Anyhow, while it would be slower in horizontal speed, the game would be much more spectacular in verticality. The human record jump of 28 inches on Earth would easily be exceeded by your grandmother on the Moon. Here is what a 140 inch jump would look like: 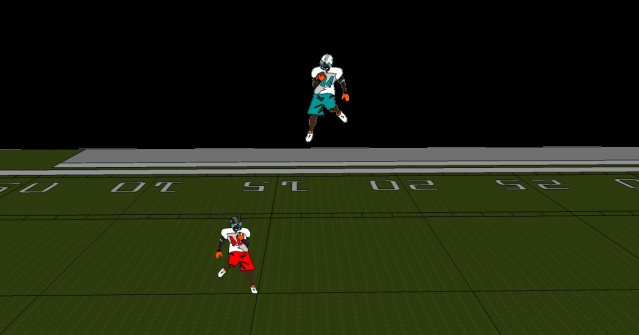 (Maybe you’re wondering, “Are they going to wear shorts on the Moon when they play football?” Well, I wanted to put a football player on the field for a sense of proportion, and while I found lots of European Football (= American Soccer) players in Google Sketchup 3D Warehouse, there were no American Football players save this one lone guy in his shorts. [I don’t know what that’s about and I don’t want to know.])

I’m not a football fan, but if there’s ever a Big Game (non-TM) on the Moon, I might just watch out of curiosity to see how the physics will work out.

Once and future engineer.
View all posts by engineerzero →
This entry was posted in Uncategorized and tagged football, moon, sketchup. Bookmark the permalink.