A few months ago, I learned about optical tweezers. Basically, a laser beam is used to manipulate very small particles down to individual atoms. The laser beam is not so strong as to burn up the object, but is strong enough to exert a force stronger than gravity so that the object can be lifted up and moved around.

It turns out that you can also manipulate biological cells this way too. Here is a scientific paper (“Cell manipulation by use of diamond microparticles as handles for optical tweezers”) you can read, to learn more than I do about the subject (yet).

Google Docs doesn’t let me copy and paste, so I won’t excerpt here. But as I show in my diagram, it did occur to me that optical tweezers might be used as a form of teleportation.

The ‘cellular’ teleporter works by having an array of thousands of computers operating thousands of microlasers acting as optical tweezers. Cells are carefully sliced out of the body, and electromagnetically propelled down an electrostatically charged, air-evacuated tube.

The effect of G-force can be counteracted by a strong magnetic field, as has been demonstrated in frog levitation experiments (you may think I’m joking, but I’m not). Thus cells can be accelerated at thousands of gees and reach velocities of hundreds of kilometers per second as they are transmitted from one teleportation site to another.

At the receiving site, the cells are reassembled by the computer and optical tweezer arrays back into the original human body. The entire process could take only a split second.

Say for example we build an Arduino-based system. The Arduino can execute millions of commands at a cost of $35 per board. Trillions of commands — enough to target every cell, position the lasers, accelerate the cells, etc, in less than second — would therefore require a cost of $35 million to implement. That’s less than the cost of a small jetliner, yet this system could ‘transmit’ thousands of people per hour, across continents in a matter of seconds each.

Now, this system isn’t instantaneous teleportation, and even falls far short of lightspeed teleportation. But at a thousand kilometers per second, it takes less than five seconds to go from LA to New York. That’s good enough for practical purposes. Well, I think so.

Since clothing, computers, wristwatches, smart phones, and other physical objects are not conveniently made of cells, accomodations would have to be made. There might be special teleporation-friendly clothing to wear. Your computer and phone data could be uploaded to a rental device at your destination. Jewelry could be shipped by overnight airfreight. I’m not sure what to do about dental fillings.

Anyhow, here’s the experimental system again this time with labels, 2D Sang watching on as 3D Sang becomes the first daring volunteer for the teleportation process: 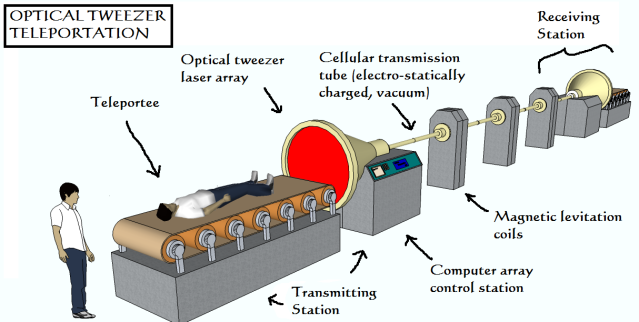 Once and future engineer.
View all posts by engineerzero →
This entry was posted in Uncategorized and tagged optical tweezers, teleportation. Bookmark the permalink.