This book originally came out in the 1970s and I have read it many times. After re-reading it this past month, I have to say that while the vision of space colonization is timeless, the technological underpinnings haven’t aged well.

O’Neill conceived of constructing giant solar panel satellites that would beam microwave power down to Earth. He justified this because panels in space can receive full solar flux 24/7, hence would be more efficient than panels on Earth. However, photovoltaic panel costs have come down so significantly that the relative inefficiency is no longer an issue.

O’Neill envisioned a largescale lunar mining operation that would involve a significant human work force. Today — and frankly even back then — practicality is on the side of sending teleoperated robots for mere millions of dollars in transportation costs, compared to billions for placing humans and human logistics on the Moon.

O’Neill went into detail about building an electromagnetic catapult on the Moon so that payloads could be cheaply launched into space. Today we know there is water on the Moon, which can be electrolyzed into hydrogen-oxygen fuel for automated shuttles that can transport cargo from lunar surface to orbit at a cost of less than a dollar per pound.

O’Neill also thought it would be necessary to visit the asteroids for the metals and water necessary to support space colonies. We now know that such materials are found in abundance on the lunar surface.

O’Neill preached Big is Better, and so his Island Three space colony design was a cylinder four miles in diameter and twenty miles long. Today we recognize that this would make it a prime terrorist target, but an even bigger sticking point is that after Fukushima we no longer have blind faith in what engineers tell us are safety factors. No longer can anyone say, “What could possibly go wrong?” without ironic overtones.

So is the dream of space colonization dead? Not at all, but I think we do have to think differently.

Let’s start by sending robots to the Moon to prospect for gold, platinum, palladium, and other ‘rare earth’ metals. If we keep the robots small, this will only cost millions and a private company can afford the investment in infrastructure.

By plying back profits, we can gradually scale up the operation. Once the transportation system has a big enough capacity to accommodate tons of shipment daily, we can construct a space colony in lunar orbit. It seems to me that lunar polar orbit, not L5, is the place for the first space colonies because it is closer to the source of most of the materials.

Finally, let’s keep space colony design modular. Even the biggest space colonies should be constructed out of modules no larger than a cruise ship. Why? Because we have experience building something of that size. Thus here is what a single colony module would roughly look like in size and shape compared to a large cruise liner: 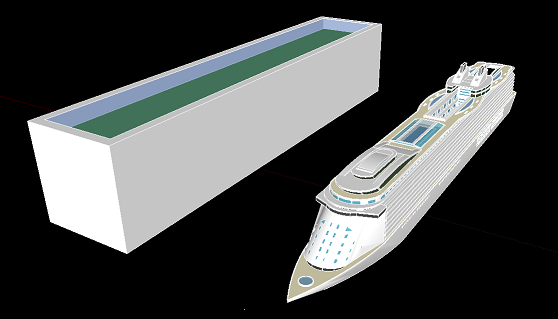 A complete ring would consist of 72 modules, which would be far enough apart that in the event of a crisis they could easily break free of the ring. And thus the complete colony would look like so: 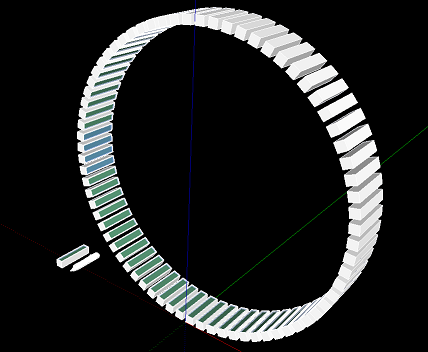 Now, modular concepts for space colonies have been discussed for some time now, but usually it’s for transition to the big ‘monoshell’ islands. I think that at the end of the day it’s much safer to stick with modules. The ship-sized modules shown here would each have an open surface area of five acres, and that seems more than adequate to avoid claustrophobia.

Finally, O’Neill described the construction of a colony in terms of a large labor force involving thousands of human workers. Today it’s far more practical for robots to assemble the colonies. Once they finish one, they can start on another, and another, and another. And say, do we really need robots? Why not just build a giant 3D printer to create the colony modules?

O’Neill was considered farsighted because he envisioned a geometric population growth rate for space colonization. But it’s possible the growth rate will be more like one, two, three, infinity. That is, once we have just a handful of colonies, we’ll be able to build a 3D printer for colony modules, and then we can print as many colonies as we want on demand.

So the dream isn’t dead, just delayed. And like pressure building in a boiler, when it’s finally released it will be explosive in its expansion. All we need now is cheap access to space. And we’re waiting on Elon Musk for that.

Once and future engineer.
View all posts by engineerzero →
This entry was posted in Uncategorized and tagged high frontier, o'neill, space colonization, space colony. Bookmark the permalink.