Posted on September 15, 2013 by engineerzero 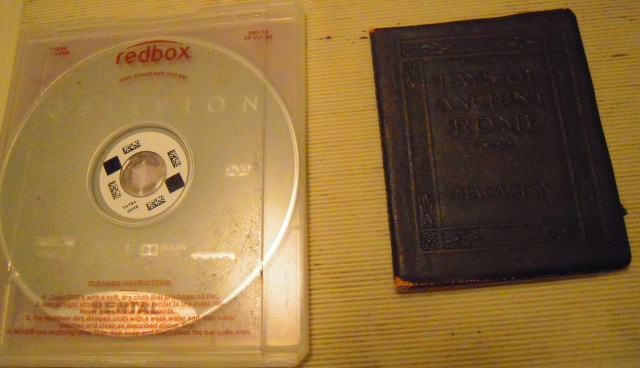 Yesterday I watched the movie, Oblivion. In the movie, Tom Cruise’s character descends through a hole into the ruins of a library. On a table is an old book titled, “The Lays of Ancient Rome.”

Now, the other day, I had gone to Redmond to visit McDonald’s Book Exchange. Redmond is still there, but instead of the exchange there was a hole in the ground. When I got back home, I discovered that the shop had moved. Today I went to the new location.

So if you’re following this, you see that I encountered a hole, and then I entered a place filled with old books. And so what happened next?

On a table I ‘just happened’ to find a book entitled, “The Lays of Ancient Rome.”

The book cost ten dollars, perhaps the most expensive book (and oldest) in the exchange. But I thought, “I’m going to follow the Synchronous Path and see where it leads.”

My, there sure is a lot of thunder right now.

Frankly, though, for ten dollars I expect more.

Once and future engineer.
View all posts by engineerzero →
This entry was posted in Uncategorized and tagged horatius, synchronous path. Bookmark the permalink.