Kits and Games for Big-Brained Superheroes

Posted on August 6, 2013 by engineerzero

For years now I’ve been collecting kits and other stuff that I haven’t been using. So I thought, why not let Big-Brained Superheroes use it? I’m willing to donate everything but the games, and I want to hold (no pun intended) onto the robot arm (for now).

Let’s start our epic journey with this Remote-Control Kit: 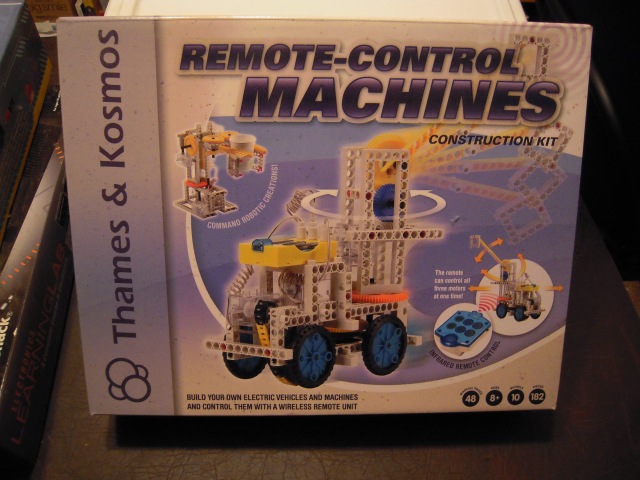 As you can see from the back of the box, it has quite a few projects that have a Lego-y feel to them, with the twist of being remotely controlled (by infrared): 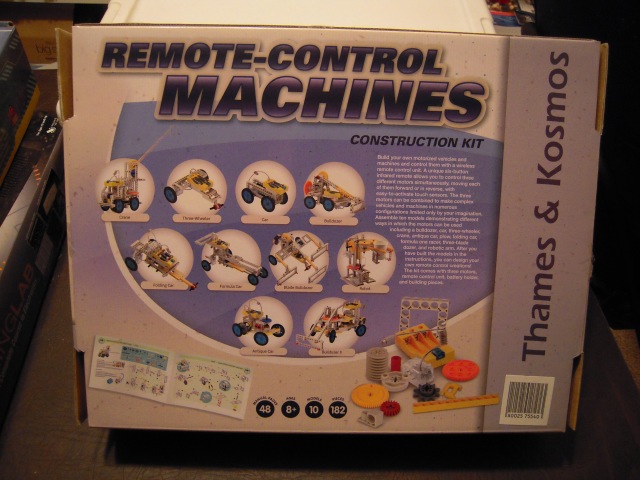 Here’s the robot arm, which I can bring to the meetings and help kids assemble:

As you can see, it’s got lots of parts so it may be something of a challenge. Of course, it’s not something that you would throw at a kid and say, “Here, put this together.” Maybe the best way for this to work is for an adult to be assembling this on his own, and kids can come over and ask questions and help if they’d like.

Once it’s assembled, it’s likely to get quite a bit more use. Playing with it will teach kids basic concepts in how robots operate.

I want to hold onto this for now because I’ve got a notion of a project to ‘hotwire’ the remote control to an Arduino, so that the arm could be controlled by a computer program. Just how far I want to take that, I’m not sure, but that would be fun to see at BBSC too, wouldn’t it? Anyhow, in the end the group would probably end up getting to keep it.

Now, this electronics kit has quite visibly been gathering dust even though it’s been all but untouched, and even my hoarder’s instinct acknowledges that it’s time to let go:

For using this kit, it might be best to let the kid handle all the components and circuitry, while the adult reads aloud from the experiment manual.

Flash cards are great for math drilling to increase proficiency and speed for standardized tests: 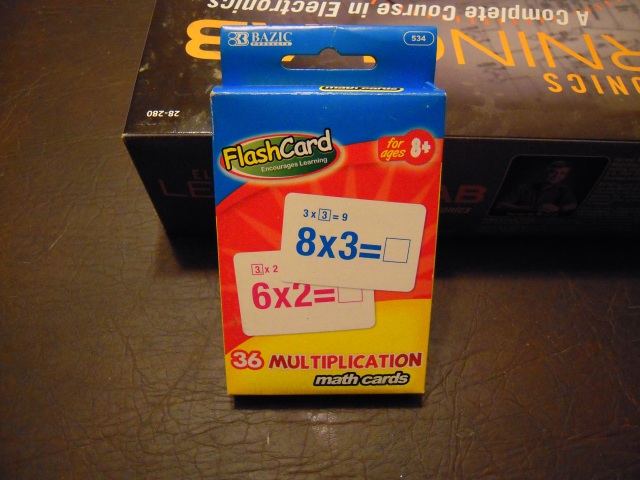 One way to provide incentive with flash cards is to reward small amounts of candy (say, an M&M) for going through the deck, for being error-free, and for finishing within a time limit.

Here’s an interesting game called Khet, which might be described as ‘chess with a laser and mirrors’: 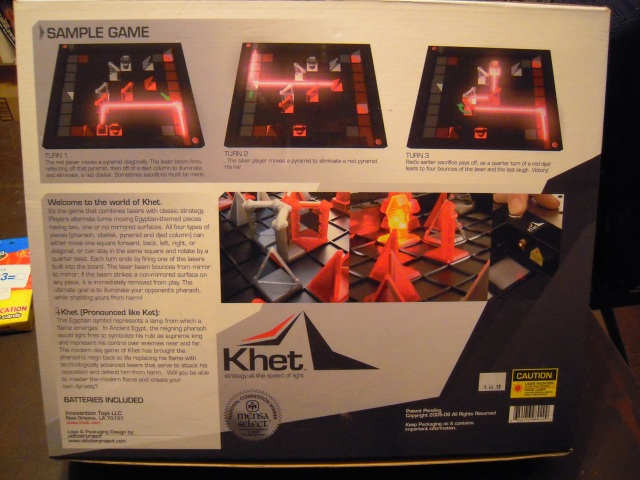 I want to hold onto Khet, but when I come to the meetings, I’ll bring it and let others play with it. Games like this are justified educationally because they teach critical thinking, strategic thinking, geometric analysis, and — IT’S GOT A LASER!!! (Enough said.)

This looks hokey, but there are people who claim that it works:

It doesn’t actually use The Force (“Awww!”). But the headband is supposed to read the user’s brain waves and transmits the data to a fan which drives the ping pong ball up and down the tube. Even people who claim that it works admit that it takes practice. Oh, and Yoda’s voice is there to ‘guide’ the young padwans!

For more info, read the back of the box:

You may be thinking, “It looks like fun, but how does it help the kids?” Well, controlling devices by ‘thought’ is actually a hot topic these days in consumer technology R&D. Letting kids play with something like this can certainly stimulate their imaginations toward a high-tech career.

And now we come to various Tamiya kits: 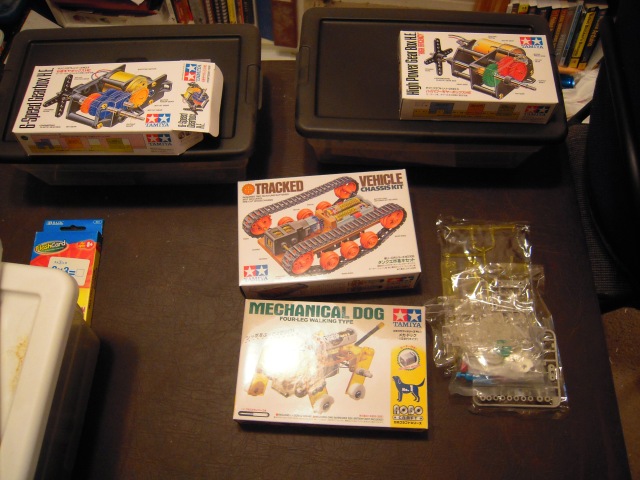 These two kits don’t look too interesting, so they may end up unopened, but at least we tried: 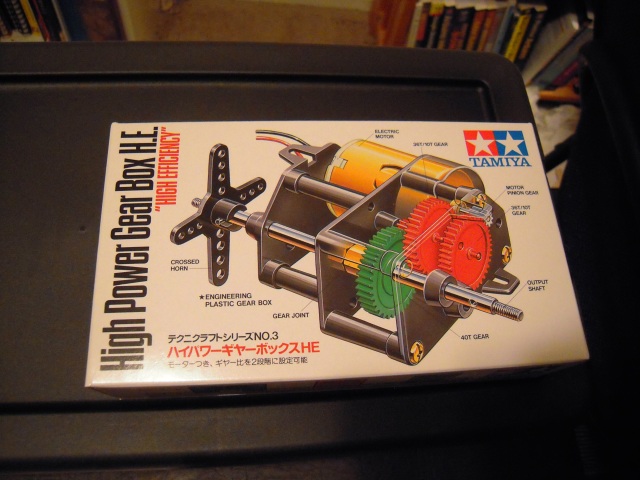 This ‘tank tread’ kit might be more interesting, but still it’s something for older kids:

This is probably the most interesting kit, a ‘walking dog’:

Here’s what’s inside the box: 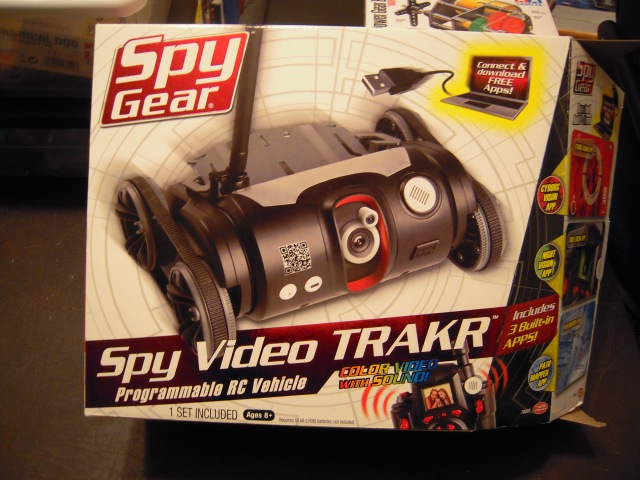 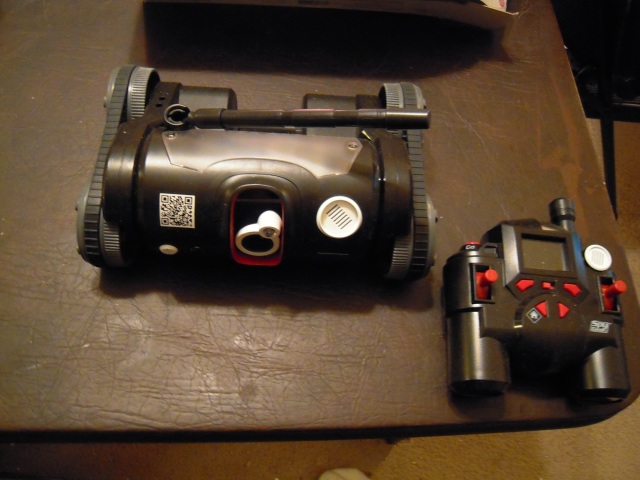 The remote control has a little monitor to watch what the robot is doing:

BTW, this thing can be connected to a computer, though I’m not sure why. At any rate, we should probably brainstorm some ‘mission challenges’ such as running it through a maze, which can encourage critical thinking ‘superpowers.’

And finally, this is a great introduction in a game format for younger kids to enter into the world of assembling Lego toys (and thence to other forms of technology):

I want to keep this, but again, I’m willing to bring it to meetings. I would like an adult to ‘supervise’ the games, simply because it is so easy to lose parts. Personally, I think it’s a great game for kids and if I may speak institutionally, BBSC will want to have its own set.

Anyhow, these are resources that BBSC can play and experiment with, to see what works in engaging the minds of kids. BBS mentors, your thoughts are welcome.

Once and future engineer.
View all posts by engineerzero →
This entry was posted in Uncategorized and tagged big-brained superheroes club, games, kits. Bookmark the permalink.