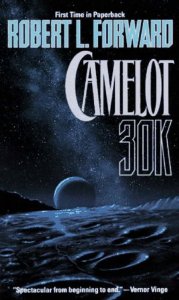 Camelot 30K is a fascinating novel about a truly alien society of shrimp-like intelligent beings who live on an ice world far beyond the orbit of Pluto. If you like hard science fiction, you’ll appreciate Forward’s meticulous technical detail. If you like stories that take place in exotic settings, this outdoes Avatar.

This book may not be appropriate for children, as it discusses social taboos at length. Some might consider age fourteen to still be too young, but by that age your younglings (Lucas’s word, not mine) have probably seen much more already on the internet. However, unlike the internet, this book treats cultural issues philosophically rather than gratuitously. So actually, this might be a good book to give an older child.

Forward is often criticized for lack of characterization, but I really came to empathize with Merlene, his Wizard of Camalor, as a real person with identifiable emotions and motivations.

The plot was entirely believable — though if I were to explain it here in 25 words or less, you probably would be incredulous. But isn’t the mark of a good plot that it is simultaneously unpredictable and inevitable?

(Warning: Do not read the Kirkus Review on the Amazon page until after you’ve read the novel, as the mark of a bad book review is that it contains a spoiler.)

I like stories that lift the reader out of the mundane world and put you in a totally new world with its own rules and logic, where every sight and sound is different. If you’re looking for a blockbuster-movie-like Super Hero vs. Super Villain grudge match that takes place a few hundred feet above an American city, then you probably will find this book boring. If you find that grudge matches above American cities are coming to be a bit tedious and are looking for original sagas upon bizarre new worlds, then you might want to give this book a try.

It’s the most fun you’ll find below the freezing point of nitrogen, and if you truly are the nerd you claim to be then you know that’s high praise indeed.

Once and future engineer.
View all posts by engineerzero →
This entry was posted in Uncategorized and tagged book review, camelot 30K, robert l. forward. Bookmark the permalink.