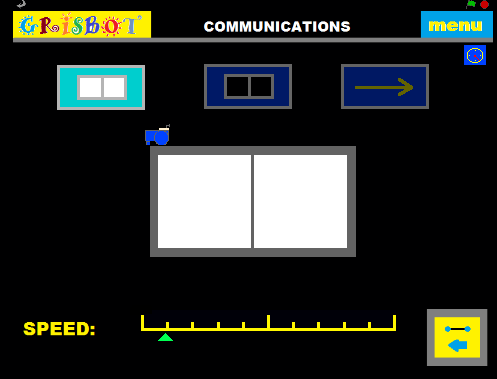 I would have liked to have had everything done with a single click, but I knew that would require time synchronization between the robot and computer while reading the hi and lo cal rectangles, and I had troubles in the past with time synchronization.

But then . . . I realized that my troubles with robot-computer time-synchronization for data transmission involved mere milliseconds. In the calibration procedure, however, I was dealing with full seconds. The robot and computer surely can’t get out of time synchronization by a full second in only a couple seconds unless their relative velocity to one another is greater than 87% of the speed of light, in which case I have bigger problems.

So here’s how the new procedure goes:

1. Turn the robot on and hold it up to the screen.
2. The LED blinks once.
3. Click the Transmit button and wait.
4. If the LED blinks twice, it’s a successful transfer.

Once and future engineer.
View all posts by engineerzero →
This entry was posted in Uncategorized and tagged grisbot, light transmission, robotics. Bookmark the permalink.