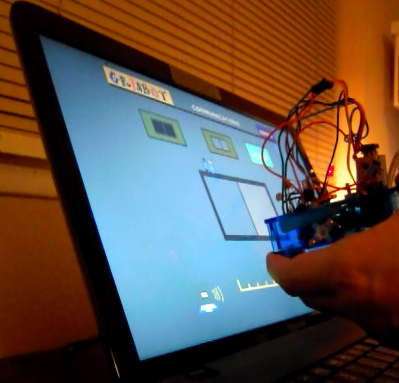 On Saturday, I took grisbot to the Seattle Robotics Society meeting and showed a demo video of the light-follow mode. After the main presentation, I got out grissy and tried to set up a real-time demo in case someone wanted to come by and talk.

Well, after all these months, suddenly the robot decided not to work. Every time I tried to transmit data from the screen to the robot, I would get a solid flash on the LED — the signal for a data transfer error.

And as luck would have it, somebody did come by to watch. But I had nothing to show him except one failure after another to do the most basic function of the robot. Is there a jinx or what?

Tonight, back home, I tested out a theory, and discovered the following:

To put in words: the data transfers fine unless I’m using an old battery and have the computer unplugged. Then I learned the hard way.

And at that, while I have identified the physical cause of my problem (ie, old battery plus computer on battery power), I still don’t know the systemic cause (ie, why that causes transfer error).

On Saturday morning, I had left the apartment and realized in the car that I had forgotten to take a back-up 9v battery with me. I stopped to buy stuff at a store but forgot to buy a back-up battery. I stood outside in the parking lot and thought about it but decided not to go back. Nah, what are the odds?

So, Boeing, you have my sympathy.

Once and future engineer.
View all posts by engineerzero →
This entry was posted in Uncategorized and tagged batteries, robotics. Bookmark the permalink.