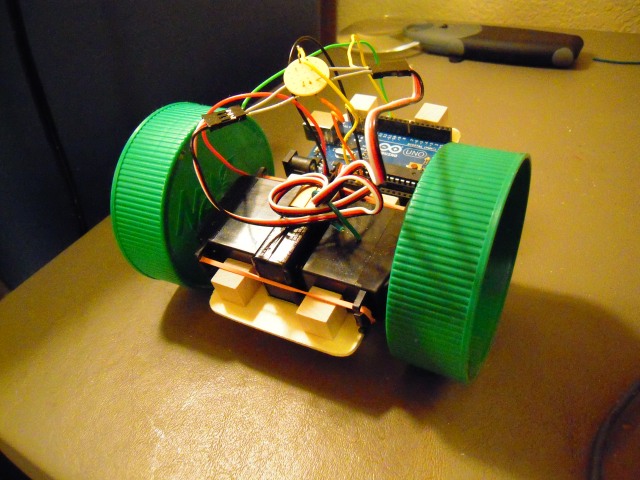 I’ve done some upgrades to my arduino robot. The change that seemed to help the most in the accuracy department was to upgrade the wheels. The potato chip container lids were kind of flimsy, so I replaced them with hard plastic iced tea jar lids.

I used a handheld electric drill to bore holes in the center of the lids. The drill was bought at Michaels on sale for $20. It’s not much but it got the job done. 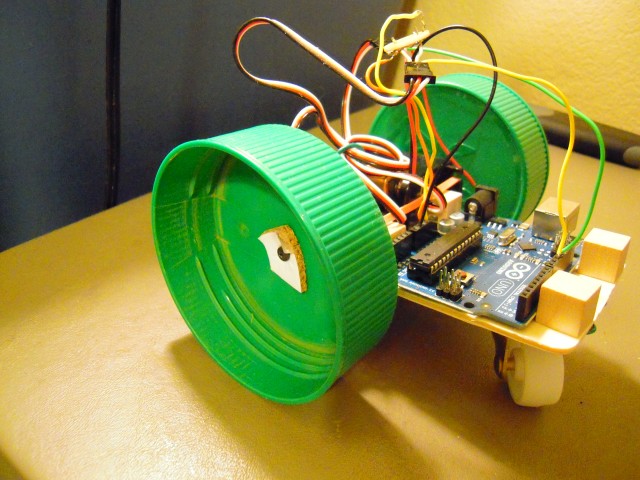 The new wheels are much wider and have grooves, so that traction is good enough to run on the carpet now. I used pieces of cork to secure the screws to the wheels. I don’t know if that helps, but it seemed like the right thing to do.

Also I put in a caster. One nice thing about using ordinary glue in a prototype is that it was easy to snap off the furniture-glider post in the previous version in order to put in the caster. Note, however, the caster is secured with thumb tacks.

A pair of casters costs about five dollars from Ace Hardware. No slight to Ace, but I’m still looking for a smaller, lighter caster as this one doesn’t seem to swivel responsively enough for the desired turn accuracy.

Another change I’m testing here is to flip the servos so that the wheels are more toward the center of the platform. Doesn’t seem to make much difference other than minor reprogramming.

All right, so here’s the video of the robot attempting to make a square path:

I need to tweak the turn period some more. In that regard, I tried to slow down the servos during the turn phase and the servo.write() function didn’t scale the way I expected. We’ll work on it.

And finally, there’s nothing informative about the following picture, but I’m tempted to glue toy eyes on those little cubes in front:

(Or maybe LEDs should go there?)

Once and future engineer.
View all posts by engineerzero →
This entry was posted in Uncategorized and tagged arduino, electronics, robot, servo. Bookmark the permalink.