Take a plastic bottle cap and make it buzz and glow. Flip it over and here’s the internals: 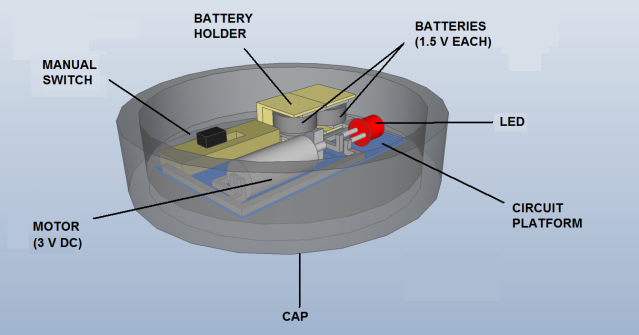 The bottle cap I have in mind is the plastic one that comes on top of one-gallon water jugs.

The 3 volt motor sells for $4 at Radio Shack. That’s the big expense item. The biggest challenge, in my limited experience, will be concocting a battery holder.

And yes, this toy is similar to the hexbug nano. But I want to expand on that capability, not just make a DIY version of a pre-existing toy but also make it cooler as well.

I’d like to put some kind of translucent design on the top of the cap, and then I’d like to modify the circuit so it could blink and turn on and off when a flashlight beam is shone on a photoresistor.

Once and future engineer.
View all posts by engineerzero →
This entry was posted in Uncategorized and tagged bottle cap, diy, led, motor, product design, sketchup, toy. Bookmark the permalink.