Welcome to the Monkey House (From Dayton to Sketchup)

Or, “What happens to monkey houses when you forget to use components.”

Perhaps you’ve read of this place in the news. It’s a 140 year old monkey house in Dayton, Ohio, kind of a local landmark. I guess they’re spending federal funds on it and everybody is upset. Anyhow, I looked it up on Google Maps and did a Prtsc on streetview. I don’t know about spending government money on it, but I’m a sucker for unorthodox architecture.

Then I went to Warehouse and searched for it, and didn’t find it. I couldn’t believe that omission, so I tried to make my own octogonal monkey house. It didn’t get very far, because after making the base, I tried to make the upper part by shrinking a copy of the base and loading it on top. But I forgot to make the base a component, so the top got stuck to the bottom like so: 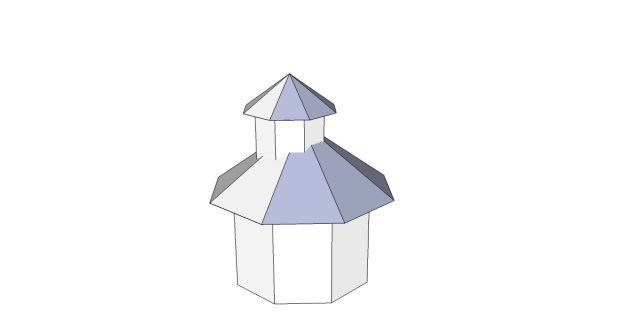 Anyhow, I was able to remove the second stage (not story, notice there are three) and do the following:

Sheesh! That render looks like it was done in MS Paint. Here’s another, this time with shading and shadows and more trees: 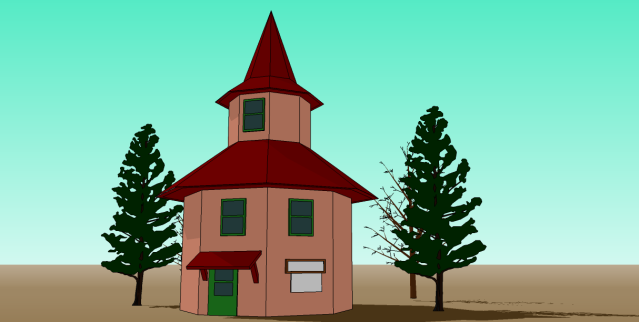 Just in case they decide to tear the thing down, it would be cool if someone archived it photographically. Then maybe someday it could pop up in a hypergrid world.

Anyhow, I just finished reading From Elephants to Mice, which discusses the intelligence and personalities of chimps in great detail. So I hope the monkeys were treated well here. Perhaps, back in the 1870s, there was wilderness enough in the Dayton area for them to roam free, coming home in the evening only to eat and rest peacefully for another day. That would be cool.

Dayton, by the way, is where the Wright Brothers grew up, so there’s an interesting tie-in with this site (ie, blog header photo). Come to think of it, it was built around the time they were born, so they probably went to it as kids.

Once and future engineer.
View all posts by engineerzero →
This entry was posted in Uncategorized and tagged Dayton Monkey House, Monkey House. Bookmark the permalink.