I’m thinking about a design for a little robot that will clean up lawns after Canadian Geese have made their messes. So I thought that in order to make an illustration of the device in operation, I should show Canadian Geese as well. However, when I went to Google 3D Warehouse, the only image of a Canadian Goose I could find was of one in flight. Time for Plan B.

Plan B was to (1) search on the internet for a photo of a Canadian Goose that is walking, and (2) import the photo into Sketchup, and (3) trace over it.

I tried the trace two ways, first with the freehand tool and then with the arc tool. Here are the results: 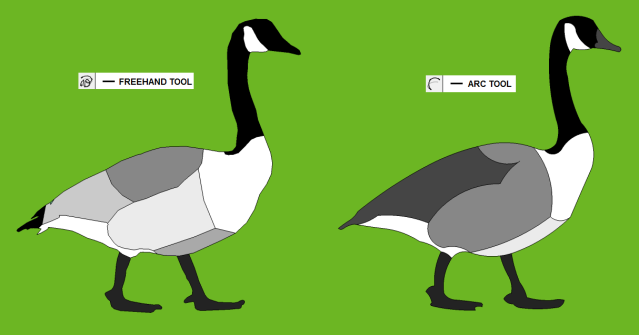 It was a good photo, but nonetheless given that Canadian Geese feathers are basically graytones it was hard to tell where the shading left off and the marking began, hence the difference in ‘coloration’ between the two renditions.

That aside, I think it is apparent that the arc tool is the way to go for tracing. Besides looking more professional, it probably uses fewer polygons and thus less memory and thus less processor bandwidth. Which is good.

Now onto the robot.